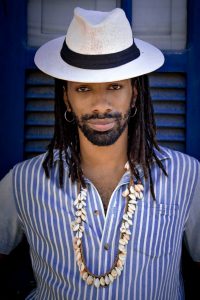 Born and raised in Porto Alegre, he began his artistic career at age 12 at the Afro-sul Odomodê music and dance group, where for seven years he worked professionally. This development led Pablo to the Porto Alegre Carnival, where he won two gold banners as a passista in 2006 and 2007. He was also invited to participate in Rio de Janeiro on the 15th anniversary of the Master Room and Porta Bandeira School, and the Personalidades Award. Samba do Carnaval, in which he was rightly awarded with the Personalidades do Samba trophy.

Today, it is in Rio de Janeiro that Pablo Guerreiro seeks to further develop his talent and knowledge in the arts. As a teacher at the Jaime Arôxa School of Dance and Cultural Center, Pablo Guerreiro taught samba in the foot and ballroom dancing, as well as dancing at the Jaime Arôxa Dance Company. Pablo also served as a teacher at the Master Sala and Porta Bandeira School Manoel Dionísio where he acquired extensive knowledge in the Carioca samba world. Pablo sought his approach to samba carioca by participating and acquiring experiences in front commissions of the carnival where he had the opportunity to work with great choreographers and be awarded two Golden Banners, choreographers: Jaime Aroxa, Hélio Bejani and Carlinhos de Jesus. In his career, he also acted as assistant choreographer for the novel Lado a Lado and as a cast preparer / choreographer for the novel Flor do Caribe both on Rede Globo television, Pablo Guerreiro served as Actor / dancer of Musical Ginga Tropical and is currently Artistic Director and Choreographer from Acadêmicos do Cubango Samba School and teaches classes around the world bringing the samba dance culture and the philosophy of the Afro-Brazilian root.